My car has hit 100,000 miles! I had to pull over and take a picture when it rolled around. I told Chad about this and pretty sure he thought it was about the most absurd thing he ever heard. It’s funny. I got my “new” car in November of 2006 and I still think of it as my new car. So let’s hope that baby is ready for another 100,000 miles because I don’t foresee us getting anything different anytime soon.

Here’s part of the reason we won’t be getting a new car anytime soon. Since we have been married we have never had to make a house payment or pay rent. We were really lucky to be in that situation and it allowed us to save up a lot of money for the house. But now the prospect of having to make the payment hurts my feelings a little. But it was all worth it. 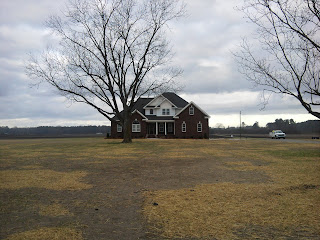 This picture was taken last Saturday when I intended to post it. We just got our landscaping finished…not that you can really tell in the picture. I should have take another one because the grass has grown so much since then and looks so pretty.
It’s been a while since my last post. I have been super busy at work and the girls have been sick. McKenna and Avery are both doing better. Their cough still sounds like they are smoking two packs a day but hopefully it will go away soon. So that has occupied the majority of what little extra time I had before.

I'm Amanda and welcome to the Bay Bush! I'm so glad you're here! This is happy place where I catalog my adventures raising three little girls, recent DIY projects and the general Bay Bush headlines! I love babies in footed pajamas, traveling, sewing, DIY-anything, sweets of any kind and I used to enjoy reading when I had "free time." I also love hearing from you so PLEASE drop me a line.